I must be hard on graphics as this is the 3rd Graphics card I had to install in my main Linux system.  The first card was an obsolete power-hungry GT-295.  I didn’t especially miss it when it went south.  The second card I had lying around which was an old 8800-GT.  Since I am running Linux and I don’t bother with games it made no difference to me that it was slow.When channel 1 mysteriously died on the 8800GT  (Alright I pulled out the card out the card for another one but I didn’t like that card so I swapped it back.)

Probably the only thing I wanted for this card was

A) Nvidia Technology and 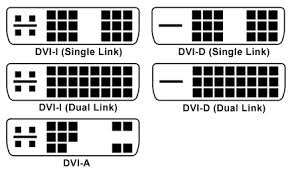 For those of you who don’t know above is a bunch of DVI connectors.  The DVI-D are digital only.  Single link is only good to 1920×1200 60hz.  So if you have a higher resolution monitor or want to go faster than 60HZ (unlikely) you would need dual link.   For my purposes the single link is fine.

DVI-I means that it can either be Digital or Analogue with a suitable converter. 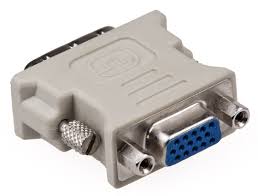 You need a handy-dandy little converter like you see above  to connect to a VGA monitor.

BTW: DVI-A stands for DVI analogue , beats me why anyone would use this , must have been a slow day at the VESA spec writing department when they came up with that.

Also the DVI interface is considered old school.  Many graphics cards are using a variant of display port.  Apples are in the forefront of this.  However,  you can get Display Port <-> DVI or Display Port  <-> VGA adaptors for not too much money so most bases are covered.

Anyway back to my saga.  It turns out that many cheap Graphics cards use a combination of DVI, VGA and HDMI connectors on board.  That way the manufacturers can save a few $$ on converters.  However ,they are  not good for my purposes as I want the rear connectors to be interchangeable.

Why is that you ask?  (Perhaps you didn’t ask but I will tell you anyway). Nvidia based cards act differently when you power up a system.  With some  models one Graphics port will display , sometimes both ports will display during the power up.  There is no way to tell beforehand which port will power up. This tends to have an influence in Linux using the Nvidia drivers as one port wants to be the main display and the other port wants to be the aux display.  (Yes, for those Linux ppl out there I know that there are overrides in xorg.conf.  I have used them but they don’t seem to persist over time , sometimes the screen will switch back and I have to restart X to get the display back to my desired configuration.)

And yes I know that there is the nouveau driver out there but I actually enjoy installing the Nvidia proprietary driver.   The fact that I can’t control the is my only (major) issue with the Nvidia drivers and card setup .

So I settled on a GT-640 card from Best Buy.  It was in stock about 20 miles from my home so I went there and noticed that the image on their website did not match what they had .  I.E. they had a VGA on one port and a  DVI-I connector on port 2.  Well that wouldn’t work as you can’t reverse them.  So I had to go to Microcenter and they had a GT-610 card with DUAL DVI-I connectors.  The only thing is that I had to pay LESS.  (Woo hoo).  There is a lot to be said for looking at the package in your hand rather than at a website.

I doubt that this matters much in a Windows box but in this case Linux is more particular.  The only thing that put me off was that this GT-610 had zero converters, so if you were connecting a VGA monitor you were SOL.  Fortunately for me I have a ton of those converters but it does underscore how little margin there is with these devices.

So after I installed this card, I d/l and installed the latest Nvidia driver 334.16. Then I found out that Nvidia gave me an “Easter Egg”.  It turns out that if you turn off one of your monitors the system will dynamically reconfigure itself as a 1 monitor system.  Right now this only works when I disconnect my secondary monitor.  I do this as I usually have more than 1 computer connected to my monitors.  One is through a KVM and the digital display I disconnect/reconnect manually.  Just thought that was pretty cool.

BTW: Apparently Nvidia is not well like by some in the Linux Community.  Here is What Linus Torvalds Thinks of Nvidia